Bartholomew Sharp – The Unlucky Pirate Who Became A Legend 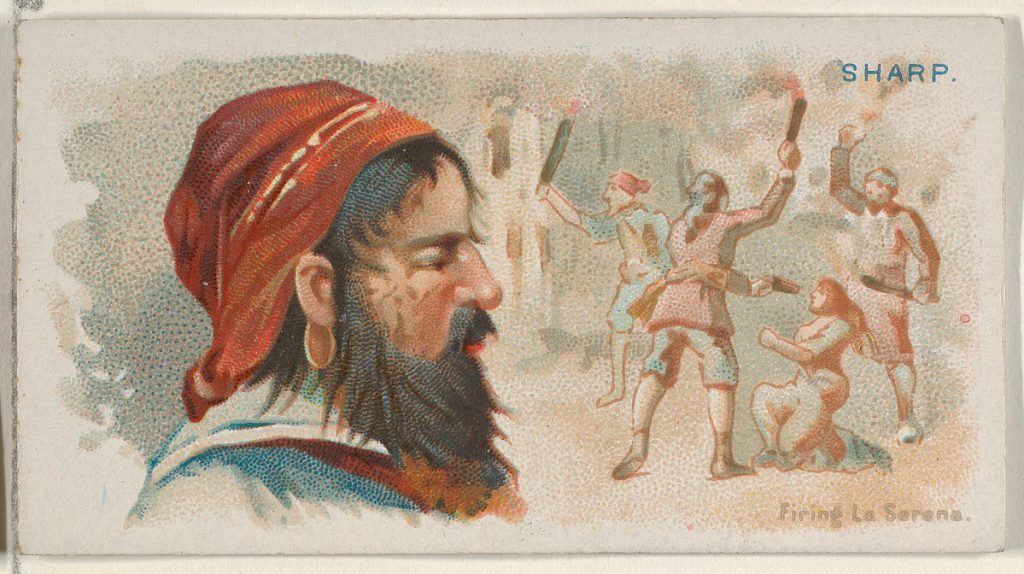 Bartholomew Sharp came from humble beginnings. Born in England around 1650, he began his maritime career serving on a privateer during the Third Anglo-Dutch War. When the war came to an end, so did his privateer commission so naturally Sharp turned to piracy to make a living. His career as a pirate lasted only seven years, 1675 to 1682, but it was what he accomplished during that time which made his exploits legendary.

Sharp, along with some other noted captains such as Hawkins and Coxon and natural scientists William Dampier and Basil Ringrose, formed their own fleet and set sail for the Caribbean to leave their make in history. In 1679, the ‘pirate fleet’ sailed into the Bay of Honduras, taking a Spanish Merchantman on September 26th. This capture was recorded by the Governor of Jamaica in his Calendar of State Papers as …

“There has been lately taken from the Spanish by Coxon, Bartholomew Sharp, Bothing and Hawkins with their crew, 500 chests of indigo, a great quantity of cacao, cochineal, tortoiseshell, money, and plate. Much is brought into this country already, and the rest is expected.”

In December of that same year, the fleet gathered at Port Morant, Jamaica for a meeting, it was at this time the decision to attack the port city of Portobelo in Panama was made as well as voting Captain John Coxon as their Admiral.

On January 17, 1680, they attacked Portobelo and raided the city. The port city was blockaded for weeks, enabling them to capture several unsuspecting merchant vessels. Once satisfied with their haul, the ‘pirate fleet’ set sail for the Bocas del Toro in Panama to divide and distribute their plunder.

During his time in Panama, rumors of Sharp’s nefarious activities began to grow. One such involved the Spanish Armada de Sur (South Sea Armada) galleon, Santa Maria de la Consolación. The Consolación was loaded down with silver, gold and gems mined in Peru when Sharp and his ‘pirate fleet’ encountered her. The captain of the Consolación didn’t wish to allow his treasure to fall into the hands of English pirates, so he made the decision to wreck the Santa Maria de la Consolación upon the reefs surrounding the nearby island of Santa Clara. As the rumor goes, Sharp and his fellow pirates were infuriated by the Spaniard’s actions. Though no treasure was salvaged from the sinking Spanish galleon, the English pirates extracted their revenge by beheading 350 of the crew.

After the disaster with the Santa Maria de la Consolación, Sharp’s ship, the Trinity, captured another Spanish galleon. However, there was no king’s ransom in jewels or gold onboard, only grayish slabs of metal were in the hold. Assuming the material was tin, the frustrated crew set aside one slab to be used for musket balls and tossed the remaining overboard. Crestfallen, Bartholomew Sharp and his crew headed for home via the Magellan Straits.

Word of their exploits in Panama was spreading, reaching the ears of England which prompted the Spanish Ambassador in London to lodge a formal complaint. Hoping to avoid another war with Spain, the English Crown agreed to bring Bartholomew Sharp and his crew to justice. And when Sharp and his crew finally made it back to the Caribbean, they were surprised to discover that they were wanted by the English authorities for acts of piracy.

Each time they attempted to make port, they found either an English frigate laying at anchor waiting for them or their entry blocked by the local officials. Eventually, they were able to make berth at Nevis, and it was there that Sharp and his crew discovered that the grayish ‘tin’ metal they were using to make musket balls were in fact, silver, as was the 700 slabs they had thrown overboard. The entire load, an estimated 150,000 pounds at the time, would be equal to 10s of millions of dollars today.

Having nowhere to hide, Sharp and his crew made their way back to England where they were immediately arrested for piracy. Luck was finally on Bartholomew Sharp’s side. In July 1681 he had managed to save a book of maps and charts from being destroyed from the Spanish ship El Santo Rosario. This collection showed in great detail different island and ports along with shoals and reefs within the surrounding waterways.

Another plus for Sharp was that he was the first Englishman to travel eastward around Cape Horn. Originally, he was planning on sailing through the Magellan Straits, but the Trinity was pushed too far south by a storm which forced Bartholomew to navigate the treacherous cape.

While on St. Thomas, Bartholomew Sharp’s luck was once more running out and he had accumulated heavy debts. He attempted to flee the island, leaving his woes behind but the authorities caught up with him. He was arrested and jailed in Fort Christian.

Meanwhile, the Trinity still lay at anchor in the harbor. Sometime during July of 1683 another vessel, a pirate vessel, the La Trompeuse pulled into the harbor and dropped anchor nearby. Unbeknownst to the other vessels in the harbor, the La Trompeuse was being hunted by the British, and on July 31, 1683, the British finally found her and set her ablaze. When the La Trompeuse exploded, flaming debris rained down upon the unfortunate Trinity, burning her sleek majestic frame and yards of canvas to the waterline before she slowly slipped beneath the dark waters to her watery grave.

Bartholomew Sharp could only watch the demise of his beloved Trinity from behind the bars of his jail cell at Fort Christian. And it was here Sharp remained until his own death on October 29, 1702.

To buy your own Isla Del Muerto coin, CLICK HERE.