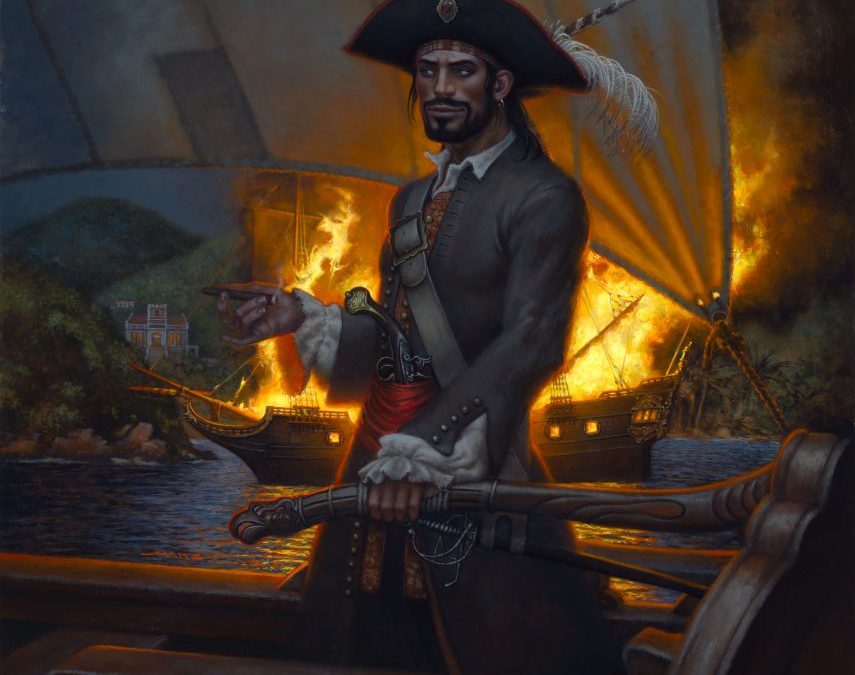 After making two successful voyages up and down the African coast, taking every ship in sight, Jean Hamlin headed back to St. Thomas to sell his plunder. As he neared the island of Nevis, a sloop was spotted sailing from Antiqua, and with very little effort Hamlin was able to add that ship to his long list of captured vessels. And with a cargo that included 65 pounds of gold, she was an excellent addition to his conquests.

When the La Trompeuse finally reached St Thomas in July of 1683, she was filled to the brim with riches, including over 2,000 pounds of gold and over 24,000 pounds of silver. Governor Stapleton of Nevis was furious when he received word that the governor of St. Thomas was harboring Hamlin, and he sent letters to both the King of Denmark and Governor Esmit protesting the sheltering the infamous French pirate.

In an attempt to appease the governors of the Caribbean nations, England sent out the HMS Ruby with orders to hunt Jean Hamlin down, but before the Ruby could reach the warm Caribbean waters, Governor Stapleton of Nevis sent the HMS Francis under the command of Captain Charles Carlile, out to capture or destroy the La Trompeuse at all costs.

Wasting no time, Carlile sailed directly to St. Thomas, and as fate would have it, on July 30, 1683, he found the La Trompeuse laying at anchor right in the harbor. In a diplomatic gesture, he sent a message ashore announcing his intentions to capture the ship, La Trompeuse. A terse response from Governor Esmit was returned, asserting that he had already captured the pirate and his ship, claiming the vessel for the government of Denmark.

Captain Carlile knew this was not true, for he had been told by Governor Stapleton that Esmit was sheltering the pirate and aiding him in selling whatever goods he returned to port with, plus, from his vantage point he could see pirates still onboard the La Trompeuse. He gave the order to move the Francis closer to the pirate vessel and was surprised, and infuriated, to be fired upon by not only the pirates, but by the Danish fort as well. Repositioning the Francis out of range of their guns, Carlile gathered his wits as he waited for darkness.

Only July 31, 1683, Captain Charles Carlile took fourteen men and rowed over to the La Trompeuse in hopes of using the darkness of night to surprise the pirates. Unfortunately, they were discovered before they could reach the ship and shots were exchanged between the two small skiffs and the frigate before they managed to board and take control of the pirate ship.

Determined to finally put an end to Jean Hamlin and the La Trompeuse’s reign in the Caribbean, Carlile set the La Trompeuse on fire in several places, all the while ordering his men to keep watch and prevent anyone from interfering and putting out the flames.

When the powder kegs on the La Trompeuse exploded, she kindled another ship, The Trinity, which lay anchored nearby. The darken harbor of St. Thomas was ablaze with light, dancing orange and red crackling flames glowed as both ships continued to burn. The mighty La Trompeuse was no more, both she and The Trinity burned to the waterline before slowly slipping beneath the murky surface to their watery graves, resting peacefully within the outstretched arms of the protective harbor.

While the La Trompeuse burned, her crew took to the hills in an effort to escape capture. Defiant to the end, Governor Esmit hid Jean Hamlin as the British scoured the town for any sign of the pirate or his crew. And when all was clear, Esmit provided Hamlin with a sloop, enabling him to escape out of Mosquito Bay (now known as Lindberg Bay).

Ever resourceful, it wasn’t long before Jean Hamlin captured another prized ship, which he named La Nouvelle Trompeuse (The New Trickster), and formed another crew in late 1684. In the meantime, Adolph Esmit had been removed from his position of governor of St. Thomas by exasperated Danish officials in October of that same year.

Jean Hamlin was still being hunted, and with his friend no longer able to offer protection, he took advantage of his old refuge at Isle la Vache, using the island as a safe place to hide before moving onto a new location in Brazil.

There are a few records of Jean Hamlin’s subsequent activities as almost fifty of his former crewmates signed onboard the ships of buccaneer Jacob Everton and privateer Jan Williams, both who had previously refused to hunt Hamlin down.

Despite the lack of evidence of Jean Hamlin’s demise at the hands of a fellow pirate or one of the many countries out for his head, the French pirate’s legend still lives on today. As does talk of a treasure room full of silver … over 24,000 pounds, still onboard his ship.