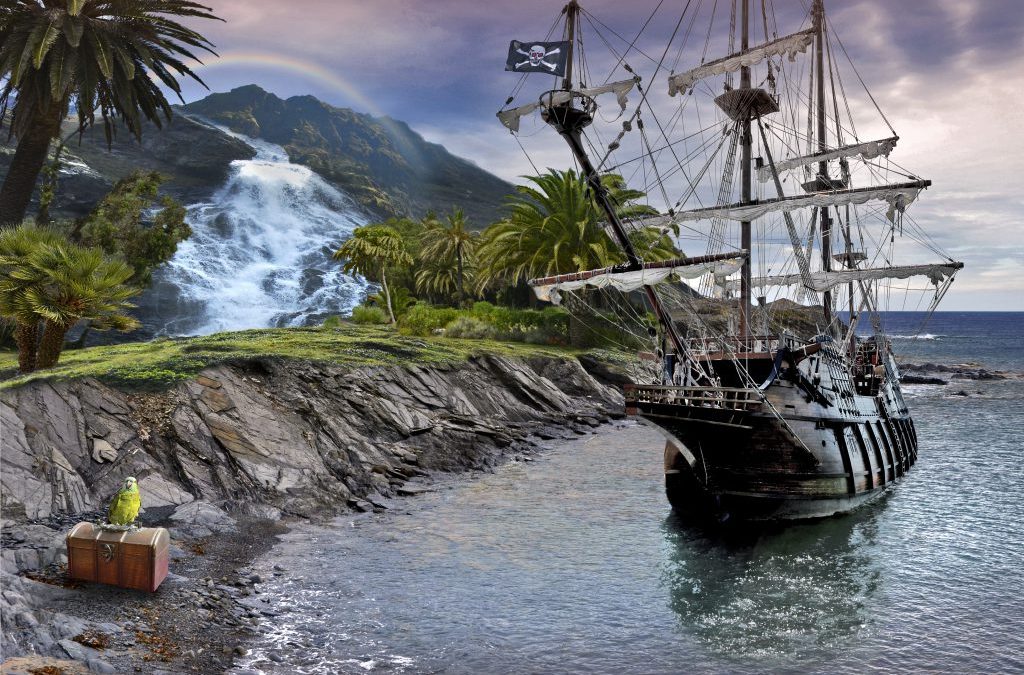 I have always been intrigued with pirate flags. From the traditional skull and crossbones to the more elaborate decorations, the symbolism and imagination of the crafters have at times left me in awe of their skill and creativity.

The origin of the first pirate flag is uncertain, references of pirate flags date back to the early 1700’s however, pirates, in one form or another, did exist centuries before so it is only logical to assume that they had some sort of flag or banner to announce their prowess as they sailed the high seas in search of prey.

For instance, the Raven Banner, as depicted on the Bayeux Tapestry, was a flag flown by various Viking chieftains and other Scandinavian rulers during the 9th, 10th and 11th centuries. The flag, as depicted in Norse artwork, was triangular with a rounded edge on which hung a series of tabs or tassels. It bore a resemblance to ornately carved ‘weathervanes’ used aboard Viking longships. The first mention of a Viking force carrying the Raven Banner is in the Anglo-Saxon Chronicle, year 878.

The Bayeux Tapestry is an embroidered cloth nearly 230 feet long and 20 inches tall which depicts the events leading up to the Norman conquest of England and it is believed to date to the 11th century, a few years after the battle.

The first recorded use of the skull and crossbones symbol was on naval flags in the 17th century, but there is conjecture that the Jolly Roger flag originated among the Barbary pirates, which would connect the black color of the background to the Muslim Black Standard, their black flag. However, there is an early reference to Muslim corsairs flying the skull symbol in the context of a 1625 slave raid on Cornwall. It explicitly refers to the symbol as being shown on a green flag.

The most common pirate flag known by many is the Jolly Roger, the skull and crossbones symbol on a black flag.

This flag was used by a number of pirate captains including Black Sam Bellamy, John Taylor, and Edward England, and went on to become the most commonly used pirate flag during the early 1700’s. It is interesting to note that some pirates called their flags ‘Jolly Roger’, but their designs were quite different than the skull and crossbones which might suggest that ‘Jolly Roger’ was a generic term for a pirate flag rather than a specific flag design.

Even the definition of Jolly Roger is contrary to the traditional design. It is said that the term ‘Jolly Roger’ derives from Jolie Rouge (Pretty Red in French) which refers to the red flag used by French privateers. Another description translates Jolly Roger into Old Roger, which is a synonym for the Devil. Yet another tie the naming of the Jolly Roger directly to the pirate Bartholomew Roberts. It is said he liked to wear a red coat and the French nicknamed him ‘Le Joli Rouge’, which evolved into Jolly Roger and eventually came to reference the flag rather than the person. And finally, English pirates roaming the Indian Ocean referred to the red flag of the Tamil pirate, Ali Raja, by his name, and progressed into ‘Ally Roger’ and ‘Olly Roger’ and finally into ‘Jolly Roger’. The English word ‘roger’ means vagabond rogue, which might have played a part in the naming.

It is important to note that the production of these flags was simple. Pirates could not hire flag-makers in port so they had to produce their own flags while onboard using whatever materials they had on hand. An easy material to use was a piece of sailcloth, which was always on hand. It could be blackened with tar and then painted with whitewash to produce a design.

The black flag and red flag have an ancient history. Sir Francis Drake, an English privateer who usually flew the flag of St. George, flew black banners and streamers back in 1585. While in 1682, Buccaneers off the islands of Juan Fernandez (off the coast of Chili) flew blood-red flags and banners.

The first pirate credited with putting a design on their flag was the French pirate, Emmanuel Wynne.

Wynne took the traditional skull and crossbones and personalized it by adding an hourglass. Symbolism played a part in the design, loosely translating Emmanuel Wynne’s flag to let his victims know that their time was running out and death was approaching. This custom-made pirate flag was flown on Wynne’s vessel around the year 1700.

Christopher Moody, 18th-century pirate who began his career as a member of Bartholomew Roberts’ crew. When he branched out on his own, he became known for his policy to give no quarter. Moody is largely remembered for his distinct flag. Instead of the traditional white on black, his flag is gold on red, the red background represented the eventual torture and bloodshed he would unleash upon his enemies, and consisted of an hourglass with wings, an arm holding a dagger and the traditional skull and crossbones, loosely translated means, death is near – your time is flying away, we are ready to kill you. Additionally, Moody would often tie blood-red pennants to the ship’s mainmast to show his deadly intent.

Thomas Tew, 17th century English privateer turned pirate. The flag he flew on his ship was black with an arm holding a sword, and although the sword signified violence was imminent, the black background suggests that violence could be avoided. Loosely translated, the design means ‘we are ready to kill you’.

Edward “Ned” Low (also spelled Lowe or Loe), infamous 18th century English pirate. Although his pirate career was only three years long, Low did manage to capture about 100 ships, burning most of them to the waterline after seizing their cargo and killing the crew. Despite his short career, Low remains particularly one of the most vicious pirates of the age, with a reputation for violently torturing his victims before murdering them. His flag was a blood-red skeleton on a black flag, letting everyone who saw it a particularly grisly death would be theirs if they refused to surrender at once.

Coincidently, Low used the same flag as Edward Teach (Blackbeard) before creating his own flag, the red skeleton figure on a black background which he first flew in 1723. Additionally, Edward Low had a second flag.

A green silk flag with a yellow figure of a man blowing a trumpet. This ‘Green Trumpeter’ flag, Low would hoist onto the mizzen peak to call his fleet captains to meetings aboard the flagship.

Stede Bonnet, early 18th-century Barbadian pirate. Sometimes referred to as the “Gentleman Pirate”, Bonnet is one of the few pirates who actually had prisoners ‘walk the plank’. Stede Bonnet was a moderately wealthy landowner who turned to a life of piracy due to marital problems. Despite the fact that he lacked sailing experience, Bonnet and his crew traveled up and down the Eastern Seaboard capturing and burning ships. Bonnet sailed with Edward Teach ‘Blackbeard’, more as an associate than a member of his crew. His flag bore a skull with a single bone beneath it, with a dagger on one side and a heart on the other. The skull represents the terror associated with Bonnet, while the bone symbolizes the scale of justice. It was his decision as to whether his enemies would be given death (the dagger) or life (the heart). Stede Bonnet’s passing judgment over his enemies indicates that he was a reasonable and just man, unlike his fellow pirates.

Bartholomew Roberts, born John Roberts, sometimes referred to as ‘Black Bart’, a Welsh pirate who was one of the most successful pirates ever. In his career, he captured over 400 ships. During his illustrious career as a pirate, Roberts had two flags.

Roberts’ first flag shows himself and Death holding an hourglass.

Roberts’ animosity towards the islands of Barbados and Martinique is depicted in his second flag. It has a figure of himself holding a dagger standing on two skulls, the letters ABH (A Barbadian’s Head) and AMH (A Martinican’s Head) are beneath the skulls.

No matter the design or the meaning, pirate flags cannot help but capture your interest. As is the case of the 230-year-old Jolly Roger that was captured in 1780 in a battle off the Barbary Coast, North Africa. This rare 18th-century pirate flag gives a little insight to what these actual flags looked like. The red woolen fabric bears a crudely stitched skull and crossbones design cut from painted cotton. Upon further analysis of the cloth, the dreaded Jolly Roger appears to have been cut from a garment as a buttonhole shape was found on the back.

Though modest in design, seeing an actual pirate flag only makes one appreciate the talent and artistry of those unpretentious swashbucklers of centuries past.